Rising from the dead 40 years after life as she knew it came to an end, Abigail Blackwood is spiritually resurrected and burdened with purpose. Taking the form of a glowing white orb, the disembodied spirit of Abigail must explore the Blackwood Manor, her former home, and the surroundings of the village of Oakmarsh to uncover what led to its downfall and the four decades of history regarding her family. Featuring a striking art design in this 2D point and click mystery, Goetia has an atmospheric eeriness that remains intriguing and moody throughout its narrative driven adventure.

Goetia wastes little time in introducing Abigail in her newly resurrected spiritual and spectral form – a glowing orb, 40 years after her death falling from a window as a teenager and setting in motion the investigatory nature of the experience. The point and click gameplay compliments Abigail’s ability to interact with and possess objects within the explorable environment. 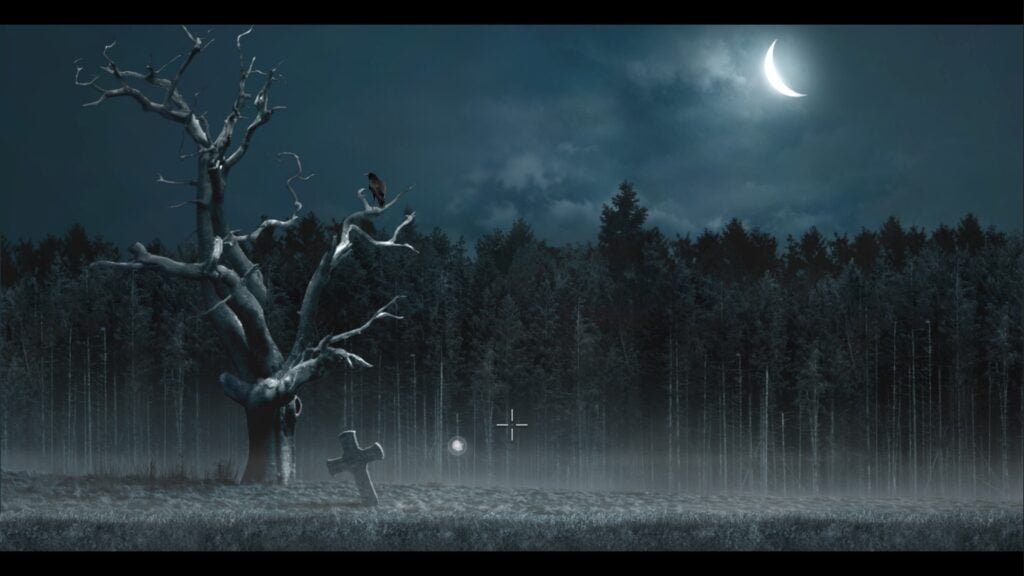 The first of five explorable locations is Abigail’s former family home, Blackwood Manor. Having succumbed to the passage of time to the time of 40 years, the estate is not as Abigail recalls, now abandoned and in a state of disrepair. Developer and self-Publisher Forever Entertainment have created a beautiful aesthetic in their realisation of a once luxurious manor that shines through despite its deteriorating state. 39 rooms comprise the once illustrious estate that are now abandoned, home only to the memories of Abigail’s family and the secrets they’ve left behind.

Confined to her newfound spectral state, Abigail is initially unable to access various rooms of the manor due to supernatural barriers, thresholds she can only cross by strengthening her own abilities in her orb form via exploration, interaction with and subsequent consumption of new orbs.

The mystery will draw Abigail outside of the walls she once called him, lured into the nearby village Oakmarsh, Eldwitch Forest, Fields of Stone and Silver Labrynth areas to uncover additional clues which will not only fill in some of the narrative blanks but allow for further exploration and puzzle solving within the Manor. Each unique location is just as dark and gritty as the manor with hints of vibrance and glimpses of illumination amidst the established darker colour pallet of the overall presentation.

The puzzle solving itself is essentially interaction with objects within the environment such as notes and documents to learn essential information required to progress, possessing an item by entering it and controlling it, taking it to another location to interact with additional objects and solving physical puzzles such as combination codes and arranging shapes in various formats into symbols. The puzzles themselves aren’t necessarily difficult but rather it is the thoroughness of the player’s exploration, or lack thereof, that serves as the only potential frustration. Progression is largely tied to solving puzzles that require knowledge obtained from exploration, a piece of information relating to an object for instance or a series of numbers on a document that are actually a combination. A lot of time could be spent backtracking looking for a single piece of information if the player fails to interact with everything as they happen across it.

The story itself has two endings, one considered bad while the other is considered the best. They both feel fitting of the narrative that has played out in the 5-6 hour adventure, which may be drawn out should the player not be as thorough with their exploration. Once each area has been unlocked the player is able to backtrack anywhere at any time, no area becomes inaccessible with story progression.

Goetia has an awkward sense of pacing, hindered by the backtracking nature of the puzzle solving. More often than not, the metaphorical key to the puzzle is not immediately nearby, sometimes in a completely different explorable area. For example, a puzzle inside the Manor may not be accessible without information found in Oakmarsh or in Eldwitch Forest, sending the player in search of the answers they seek and then having to return to use it. Relying on text driven dialogue to push the narrative, which has no traditional cutscenes as such, Goetia struggles to maintain a narrative/exploration balance in its moment to moment storytelling.

For a point and click title Goetia certainly delivers depth in its visuals. The backgrounds are striking with the sky animated with moody clouds and moon light in contrast to the rather static interior backdrops. It’s surprisingly stunning and the haunting score and sharp sound effects work in unison to deliver an ultimately tense and atmospheric presentation.

Goetia tells a tale with heart and surprisingly layered character development despite Abigail being confined to the form of an orb. The mystery element works well with the point and click gameplay and is satisfyingly rounded out with its stunning audio-visual tag team. 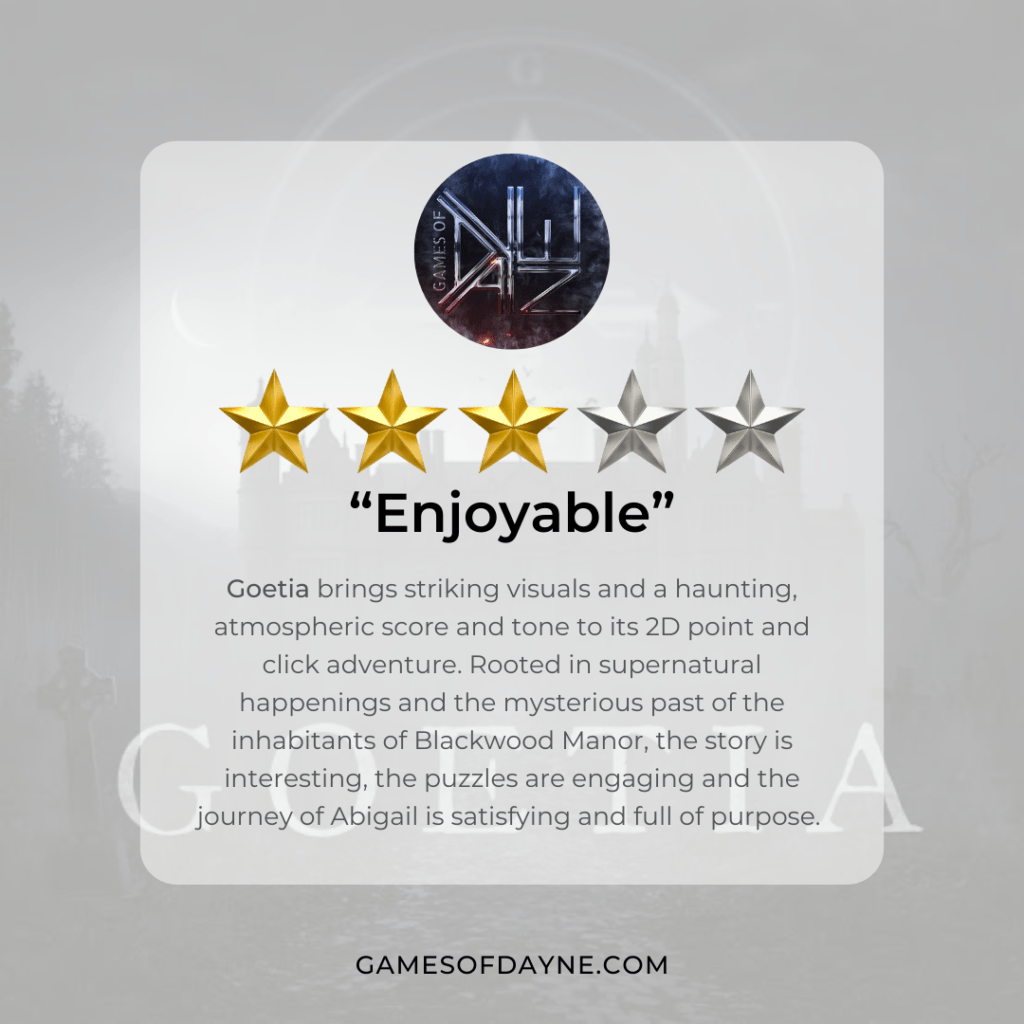 * A digital code was provided by the Developer/Publisher for the purpose of this review. *

The Last of Us Part II Review